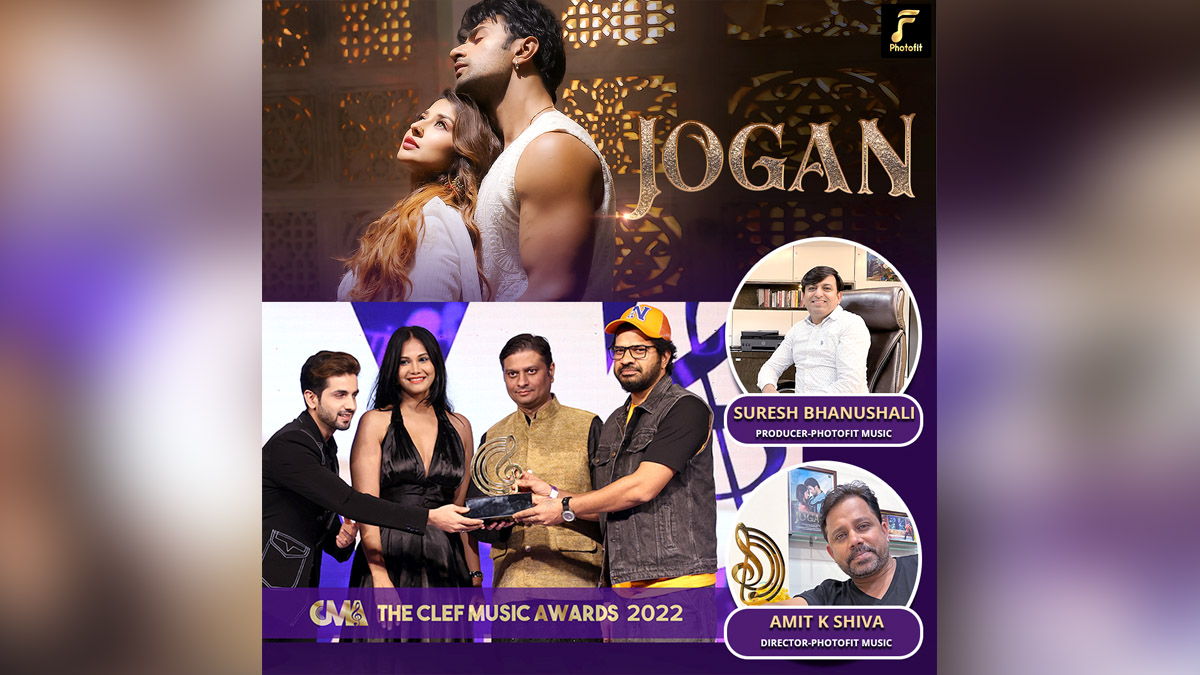 Mumbai : Awards are the magical time for any project to be recognized in our Music and Film Industry. One such colossal award ceremony held in Mumbai’s Sahara Star was “The Clef Music Awards” by Radio and Music. This award ceremony revolved around the Music Business and honoring and respecting musicians from various genres.
The Radio and Music Clef Music Award integrate musicians, lyricists, composers, bands, and record labels, from the Hindi and English language music fraternity pan-India.
Notable names from the World of Music & Entertainment Industry, such as Leslie Lewis, Amit Sana, Divya Kumar, Payal Rohatgi, Kavita Seth, Anuskh Bharadwaj, Sonu Kakkar, etc were part of this grand event.
“Jogan” by Suresh Bhanushali and Photofit Music successfully made its space in this prestigious Music Awards in the “Best Popular Sufi Song” category. Photofit Music has genuinely been a motivation for their fans and has demonstrated persistently through their work.
“Jogan” is a beautiful love tale with a vibrantly colorful and traditional backdrop featuring dapper Nishant Malkhani and super charming Saba Khan. Mujtaba Aziz Naza and Nirupama Dey have shared their ardent vocals to make the song magical, poetic, and reviving. The song is flawlessly penned by Mumtaz Aziz Naza.
The song was conceptualized, visualized, and artistically shot by Director Mr. Amit K Shiva with his masterstroke perfect skills. “It is an immensely proud moment for us, that our work is being perceived. Jogan was shot on an elevated scale which is ultimately being recognized and is honestly a dream come true.
No doubt this song had gathered enormous love from fans being a Sufi romantic song. And now getting an award for the same totally paid off”’ adds Amit K Shiva, Photofit Music.Suresh Bhanushali, Producer, the backbone, and man behind Photofit Music expresses his true gratitude towards “The Clef Music Awards” and the jury, that they regarded the song with sincere love.
Also, he adds, “we will keep making songs on various genres and we will keep creating history with our projects”.Mr. Rajiv John Sauson, Project Head of Jogan, received the award on behalf of Photofit Music.
He further adds, “Our enthusiasm for music is invincible, Jogan was a dreamlike project for Photofit Music and the hard work our team has put into the song has remunerated.
With so many incredible entries it’s a proud moment for us and we guarantee you plenty of such songs that will break the barriers. This is just the beginning and many more to come.